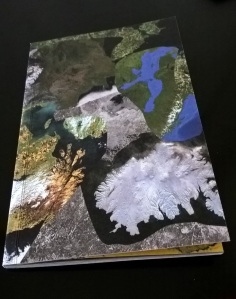 I am currently writer in residence at HIAP – Helsinki International Artist Programme, on the Finnish island of Suomenlinna, working on a project called Frontiers in Retreat.

Frontiers in Retreat is an art and ecology project I have been involved in for the last four years. A series of exhibitions, titled Edge Effects, has just begun and showcases some of the work produced by the 25 artists and 8 curatorial partners in the project:

HIAP has just produced the beautiful booklet above, designed by NODE in Berlin, and edited by Salla Lahtinen and Jenni Nurmenniemi. You can download a free copy here

The booklet summarises the work of the Frontiers in Retreat artists and partners and is also available at the Edge Effects exhibition venues. It features the photograph below of my installed text work, MEANDA, from the Exoplanet Lot exhibition organised by Maison des Arts Georges Pompidou, Cajarc, last year.