Last week I participated in a local authors’ salon organised by the Tourist Information Office in Laguepie, a village in the south of France, where I live part of the year. My novel, Almodis, is a fictionalised account of the life of the 11th century Countess of Toulouse and Barcelona. My book sat alongside French books on the history of the region and books for learning the ancient language of Occitan, which my heroine would have spoken. Whilst I was in Laguepie last weekend, the season turned, the village woke to a heavy frost and ice floes on the river Viaur – the same river that my heroine would have travelled along.

Now I’m working on my next novel, The Viking Hostage, which will be published by Impress in early 2014. The story is set in Limoges, France and Pembrokeshire in Wales. It recounts the tangled lives of a Norwegian woman sold into slavery in childhood, her Viking brother, a French heiress, and the Viscount of Limoges. Like Almodis, the seed for this novel, was a true account of a kidnap. The historical woman, Almodis de La Marche, was kidnapped by the Count of Barcelona and that historical fact set me to wondering how it had come about and why. In The Viking Hostage, the French heiress Aina of Segur, is kidnapped from an island monastery by Norse Vikings, days before she is due to marry the Viscount of Limoges. In the historical record (the Chronicles of Ademar de Chabannes), the Count paid an enormous ransom to the Viking raiders and got his bride back after three years. I am imagining what may have happened in those three years.

Print from a Viking brooch: 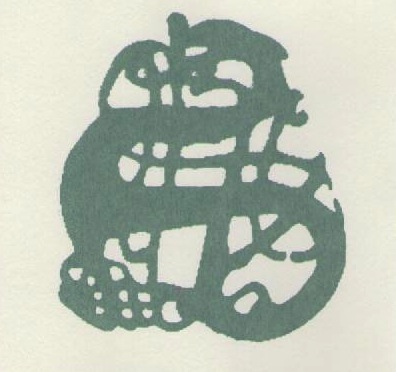